I think I’m noticing more and more people using “I” instead of “me” when it’s the object of a verb, as in “Please give it to Joe and I.” This may have started as an over-correction. Kids are taught not to use “me” as the subject of a sentence (as in “Me and Joe are going to the store”) and they generalize it to never use “me” if another name is involved. After all, it’s a cognitive task to figure out whether to say, “she and I” or “her and me,” depending on the function of the phrase in the sentence. Perhaps a new rule is gradually arising that you always say “I” when there’s another name in the phrase. I must say that I don’t like the change, because it reflects a lack of consciousness about how the language is structured; but languages change, and I can get used to it.

If you search Google right now for “to you and I” and “to you and me,” you’ll see 181 million of the former phrase and 36.9 million of the latter, almost a 5-to-1 ratio in favor of the choice that grammar books would declare to be incorrect. (“To you and I” is always incorrect if you apply the traditional and official rule that an indirect object takes “me.”) This ratio suggests that the grammarians are losing a struggle against linguistic evolution.

Here are the frequencies of all possible combinations involving I or me and he/him she/her. The most popular are the incorrect options “to him and I” and “to her and I.” Interestingly, “to me and she” is very popular, but its grammatical equivalent, “to me and he” is rare. The correct options are less popular, and there are several conceivable combinations, such as “to I and he,” that no one uses. 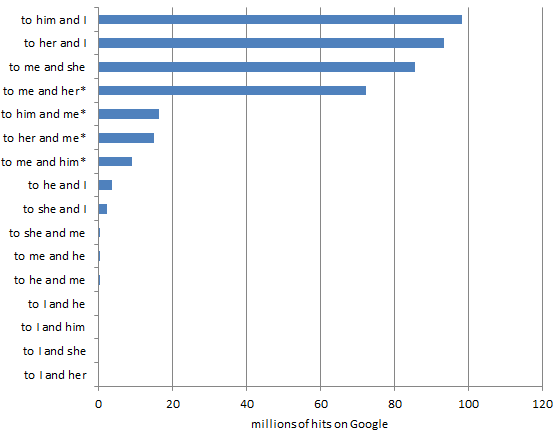 The question is whether this is really a trend. I know of one device for tracking changes in language over the long span: Google’s nGram tool. It has a major limitation: the corpus is limited to published books. Most books are professionally edited, and thus much less likely than ordinary speech to violate grammatical rules–except insofar as they report dialogue.

Even given that limitation, the trend is interesting. “To you and me” outnumbers “to you and I” in books, in contrast to the World Wide Web as a whole. But “to you and I” is not very uncommon, and it has increased as a share of all the text in published books. It can literally not be found in any book published in 1800. One period of increase was between 1880 and 1920. Another was after the year 2000. But “to you and me” has also rapidly increased since 2000, and the ratio in favor of the grammatically normative version has actually increased in books.

We are thrilled to share that Katie Hyten of NCDD member org, Essential Partners, recently gave a Tedx Talk on Designing Communication: Moving Beyond Habit. It is always so exciting to see the work of the NCDD network and have important communication skills being shared like the ones she recommended!

The talk was given at TedxTufts just a few weeks back, in which, Katie talked about the need to transform the way that we communicate at every level. She shared how defensiveness and survival mechanisms can kick in during challenging conversations, even those with whom we have close personal relationships. She offered several tactics in order to listen better, be more intentional, and ultimately more effective when communicating with each other. Like she highlighted in her talk, when we transform the way we communicate, we transform our relationships.

Great work on this TedTalk, Katie! We encourage you to watch the video below.

Case: The 2nd Sitting of the Irish Citizens' Assembly: Responding to an Ageing Population

May 30 '18
Author:
Scott Fletcher
The Assembly met across two weekends to deliberate how Ireland should respond to the challenges and opportunities association with an ageing population. The Assembly agreed on 21 recommendations focusing on the state's duty to provide assistance in the form of long term care, independent living, income and pension provision, and...

WOW! It’s the five-month mark until the 2018 National Conference on Dialogue & Deliberation happening November 2-4 in Downtown Denver and we are getting so excited!! Last week we had over 100 proposals come in for workshop sessions at NCDD2018 and our conference team is now working through them. There are so many fantastic ideas that came in, we can’t wait to share with you what the line up will be! If you are interested in learning more about what NCDD conference have been like and what kind of workshops our innovative network has brought to the table in the past – make sure you check out our past conferences (and guidebooks!).

In addition to sharing our excitement about the upcoming conference, we wanted to give a friendly reminder that the “Super Early Bird” rate for tickets is available until tomorrow Thursday, May 31st! This is the only time that tickets for the conference will be available at this low rate, so make sure you secure yours before they go up on Friday. Whether you are have been working in dialogue, deliberation, and public engagement for many years or you are a newbie in the field – our conferences have something for everyone! Register for the conference by clicking here.

Our theme for this conference is, Connecting and Strengthening Civic Innovators, and it is our hope that we can come together to work on how to further amplify dialogue, deliberation, and public engagement work. There are so many valuable processes and resources that our extended community of practice offers, and we’d like to explore ways to make this work spread. Check out our ideas on the NCDD2018 page here for how we want to further build D&D power and deepen the impact of engagement work.

NCDD conferences are known for being energetic and transformational experiences where this incredible talking tribe can come and work together. They are opportunities which only come around every other year, so we hope you will join us in Denver this November!

Case: The 1st Sitting of the Irish Citizens’ Assembly: the Eighth Amendment

May 29 '18
Author:
Scott Fletcher
The Assembly met across five weekends to deliberate the country’s 8th Constitutional Amendment which defends the right to life. The Assembly’s recommendations by majority vote were essentially to repeal or replace the amendment.

May 29 '18
Author:
Scott Fletcher
Established by parliamentary resolution in 2016, the Citizens' Assembly is a permanent, deliberative body of 100 randomly selected citizens who collect public opinion, debate, and provide recommendations on the topics outlined in its founding documents including the Eighth Amendment of the Constitution, state response to an ageing population, state action...

“[Philip] Roth, who passed away last week, will be spending a lot of time with Arendt now, as he will be buried near her in the Bard College cemetery. According to an anecdote related by Bard’s President, Leon Botstein, Roth requested to be buried in the Bard cemetery so we would be able to talk to Arendt in perpetuity.” — Roger Berkowitz

Philip: Hannah? Hannah? Dr. Arendt? Let’s talk about Irving Howe, can we? I was thinking maybe we could start with him. In 1972, he accused me “thinness of culture, … of ressentiment [and] freefloating contempt and animus.” He said that your Eichmann book demonstrated “surging contempt” and “the supreme assurance of the intellectual looking down” on others. Now, was that fair? Where did he get off accusing us of contempt in such a contemptuous way?

Hannah: English, please, Heinrich. You still need to practice your English. It’s just Philip. Philip Roth–the young novelist? Although he actually doesn’t look so young any more. He’s buried on the other side of me now.

Heinrich: What? Forever? Did you agree to this?

Philip: How about Gershom Scholem, Hannah? He accused us both of being self-hating, anti-Semitic Jews. Who made him the arbiter?

Heinrich: Could we talk to Leon about getting this fellow moved somewhere else?

Philip: Hannah, tell me about Berlin in the twenties. [Wistfully] You guys didn’t have to wait ’til the sixties for the sexual revolution, did you? Talk about putting the id back in Yid–you Weimar intellectuals already took care of that. Cafes, cabarets, it must have been great. But Heidegger? What did you see in that old Nazi?

Hannah: Ach, please, both of you. “Death not merely ends life, it also bestows upon it a silent completeness, snatched from the hazardous flux to which all things human are subject.” Can we try a little of that silent completeness for a while?

(See also: The House of Atreus: A Play; and for Gerard Manley Hopkins)

In case you missed it, we had another excellent Tech Tuesday last week featuring Mismatch, a creation of Allsides! Over 50 participants joined the call to learn more about this engaging platform that seeks to match people of diverse perspectives through video conferencing. This was a great opportunity to learn how this platform has been utilized in schools and the ways in which it has already transformed peoples’ lives. We strongly encourage you to check out the recording of the call to learn more about it!

On the call, John Gable and Jaymee Copenhaver of Allsides started off the conversation by sharing how polarization has shifted here in the US and that our country has never been as polarized as it is now. They pointed out the dangerous combination of the 24 hr news cycle, massive polarization, and increasing tendency for people to live in bubbles has people more extreme in their beliefs and significantly less tolerant.

Mismatch helps to address this because it connects classrooms across the country via video conferencing and allows students to hear from someone different from themselves. And they had some phenomenal results! Many of the students who participated found their nervousness was dramatically reduced afterward and 92% said they better understood the other person better. John and Jaymee shared the future goals for the platform; while it is currently being utilized in schools, they hope to expand its reach to libraries, orgs in the D&D field, and ultimately the broader world.

Some of our favorite quotes during the Tech Tuesday:

We recorded the whole presentation if you were unable to join us, which you can access on the archives page here. We had several insightful contributions to the chat, which you can find the transcript of here. Access to the archives is a benefit of being an NCDD member, so make sure your membership is up-to-date (or click here to join).

Big thank you to John, Jaymee, and everyone who joined us on this informative call! We encourage you to check out the TechTues recording and learn more about Mismatch at www.mismatch.org/. To learn more about NCDD’s Tech Tuesday series and hear recordings of past calls, please visit www.ncdd.org/tech-tuesdays.

Finally, we love holding these events and we want to continue to elevate the work of our field with Confab Calls and Tech Tuesdays. It is through your generous contributions to NCDD that we can keep doing this work! That’s why we want to encourage you to support NCDD by making a donation or becoming an NCDD member today (you can also renew your membership by clicking here). Thank you!

Case: Street Law’s “Democracy for All”

May 26 '18
Author:
Nilanee Koneswaran
Street Law's ‘Democracy for All’ civic education programme teaches high school students and adults their political rights and empowers them to become active, informed citizens. The programme is a direct response to concerns over ethics, institutional capacity, and poor governance in South Africa.