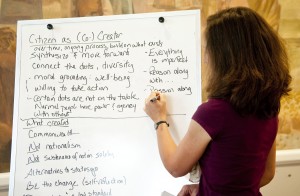 This site is a hub for the intellectual community of researchers and practitioners dedicated to building the emerging field of civic studies. An interdisciplinary field, civic studies seeks to understand and strengthen civic politics, initiatives, capacity, society and culture.

Like any vibrant intellectual community, civic studies encourages debate and disagreement, but it assumes some premises:

Learn more about civic studies through the below scholarly articles. Additionally, connect in person with other civic studies scholars through the the Summer Institute of Civic Studies and Frontiers of Democracy conference, which take place annually in July.

Civic Studies: Approaches to the Emerging Field is a volume co-edited by Peter Levine and Karol Edward Sołtan and published by Bringing Theory to Practice and the American Association of Colleges and Universities as the third in its Civic Series. It is available for free download (pdf) or for purchase at $10 for the volume. Contents:

The Good Society Journal and its Symposium on Civic Studies

The Good Society, published by Penn State University Press, is a journal of civic studies. It is edited by two Summer Institute of Civic Studies alumni, Joshua A. Miller and Matt Chick.

We Are the Ones We Have Been Waiting For

Written by Peter Levine, the Lincoln Filene Professor of Citizenship & Public Affairs at Tisch College, We Are the Ones We Have Been Waiting For: The Promise of Civic Renewal in America (Oxford University Press, 2013) applies civic studies to strengthening democracy in the United States. Chapter 2, “How to Think About Politics: Facts, Values, and Strategies,” argues for considering political issues from a civic studies perspective. Former Sen. Bob Graham writes, “As America has wallowed through an unprecedented decline in civic engagement, Peter Levine has been a lighthouse warning of the dangers of civic alienation. Now, he makes the encouraging case that although we will live for a while with the consequences of past mistakes, the worst of the storm is over. Professor Levine concludes with ten common sense strategies that can energize the people and their governmental institutions while preparing a new generation of Americans with the values and competencies to sustain our reinvigorated democracy.”

Photos on this site are courtesy of Jodi Hilton for Tufts University Photo.