Today, September 19th, 2010, The Clarion Ledger published a piece I contributed for them called "Choosing Civility: The Lemonade Lesson."  Once again, I benefited from the editors' excellent headline abilities, since my titles are never as punchy.  Mine are always more descriptive.  Anyway, I'm learning!  First, here is a link to a PDF scan of the article.  Along with that you'll find the text from an additional piece that the editors put together as a follow-up article.  This really made the opinion and perspectives sections today nicely unified in addressing a common point.  Kudos to the Clarion Ledger folks.

I should also mention that I was honored to have Marshall Ramsey (his Clarion Ledger blog and his own blog) create some excellent art to go with my piece.  Here's the graphic: 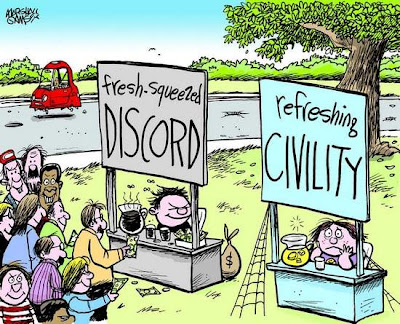 Here is the text of my article:

On a hot summer day, young girls gave out lemonade in their neighborhood. The fact that they were not charging for their kindness launched columnist Terry Savage of the Chicago Sun-Times into a rage. According to Savage, these girls were the problem with America and a symptom of it.

(by the editors of The Clarion Ledger)
As much more eloquently expressed in today's Perspective essay by University of Mississippi assistant professor of Public Policy Leadership Eric Thomas Weber, can't we just all get along?
No, that's not the real question nor is it even a plausible question. Of course we can't just all get along.
We are Americans. We disagree. It's in our national DNA. We have a constitutional right to disagree in a nation founded on the principles of guaranteed freedoms and the pursuit - at least - of happiness.
But must we disagree so disagreeably? Must we demonize those with whom we disagree? And most of all, must we engage in an ever-escalating war of character assassination and what has come to be called the politics of personal destruction in the process.
The concept of the loyal opposition in this nation is not-so-slowly disappearing and being replaced by those who value "calling out" and "taking down" those with whom they disagree far more than a civil debate of the issues in which the ultimate goal is the common good.
America over the last two decades has become increasingly polarized - left and right, liberal and conservative, progressive and patriot, black and white, rich and poor, hawk and dove.
It is as if America's political landscape is becoming - like professional wrestling - a carefully scripted pantomime of hero versus heel. One wonders what Abraham Lincoln and Stephen A. Douglas would make of modern American political debate were they to tune in to the more animated discussions of the more extreme commentators on both MSNBC or Fox News on any given night.
What is lost in the growing incivility of public discourse at every level is the sense of American community.
In their debates, Lincoln expressed an admiration for the oratorical skills of his opponent Douglas: "With public sentiment, nothing can fail; without it nothing can succeed. Consequently, he who molds public sentiment goes deeper than he who enacts statutes or pronounces decisions. He makes statutes and decisions possible or impossible to be executed."
Competition is good, particularly in the marketplace of ideas. Spirited, passionate debate from all corners of the political spectrum is healthy and fosters the germination and growth of ideas that lead to progress.
But the level of incivility that reigns in this country today breeds political gridlock and division that threatens to paralyze government at a critical juncture in the nation's history. How much progress our nation could make if we pulled together half as hard as we pull against each other on a daily basis.
- Editors at The Clarion Ledger.  Visit The Clarion Ledger here.