She’s all cheekbones, lashes, emotions
Conveyed in rapid succession, practiced.
Cut to his reaction, the impact on his famous
Face, bathed in a warm and flattering light.
Then they’re running athletically away,
Silhouettes diving before the fireball.
This is living. This is doing something.
It plays on long rows of screens suspended
Above the welded seats, the wall-to-wall,
The strewn paper bags and strewn human forms.
Slumped, plump, pursued by a slower fire,
None watch the screens deployed for our relief.
We find darkness in that old space behind our lids,
Or gaze out, or stare down at smaller screens
Where more looks and loves, kisses and missiles
Remind the living what it looks like to live.

“[Philip] Roth, who passed away last week, will be spending a lot of time with Arendt now, as he will be buried near her in the Bard College cemetery. According to an anecdote related by Bard’s President, Leon Botstein, Roth requested to be buried in the Bard cemetery so we would be able to talk to Arendt in perpetuity.” — Roger Berkowitz

Philip: Hannah? Hannah? Dr. Arendt? Let’s talk about Irving Howe, can we? I was thinking maybe we could start with him. In 1972, he accused me “thinness of culture, … of ressentiment [and] freefloating contempt and animus.” He said that your Eichmann book demonstrated “surging contempt” and “the supreme assurance of the intellectual looking down” on others. Now, was that fair? Where did he get off accusing us of contempt in such a contemptuous way?

Hannah: English, please, Heinrich. You still need to practice your English. It’s just Philip. Philip Roth–the young novelist? Although he actually doesn’t look so young any more. He’s buried on the other side of me now.

Heinrich: What? Forever? Did you agree to this?

Philip: How about Gershom Scholem, Hannah? He accused us both of being self-hating, anti-Semitic Jews. Who made him the arbiter?

Heinrich: Could we talk to Leon about getting this fellow moved somewhere else?

Philip: Hannah, tell me about Berlin in the twenties. [Wistfully] You guys didn’t have to wait ’til the sixties for the sexual revolution, did you? Talk about putting the id back in Yid–you Weimar intellectuals already took care of that. Cafes, cabarets, it must have been great. But Heidegger? What did you see in that old Nazi?

Hannah: Ach, please, both of you. “Death not merely ends life, it also bestows upon it a silent completeness, snatched from the hazardous flux to which all things human are subject.” Can we try a little of that silent completeness for a while?

(See also: The House of Atreus: A Play; and for Gerard Manley Hopkins) 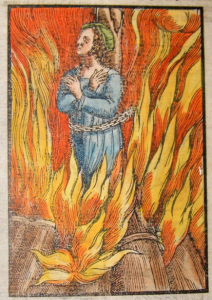 (Washington, DC) I just signed a contract with The Florida Review so that they can re-publish my interactive novel, The Anachronist. It should appear there in July 2018, and it will reside on their digital platform, Aquifer. It also remains, at least for now, on my site. Four reviews are collected here.

In home movies and fading Polaroids,
They look funny, their lapels wide and garish,
Their facial hair risible, movements jerky.
They look naive–fools, ignorant of what came next.
But I report: the grass felt just the same
When you raked your fingers though its crisp stems.
On a suddenly warm January day,
Wafting over sodden drifts, the air smelled
The same, and laughter sounded the same
Filtered through traffic thrum and cicadas.

The green belly of a wave stretches, tautens
Under its own mass–filaments or nerves
Of paler green stretching to their limits
As the body, relentless, falls forward.
But the wave is a hybrid creature, its
Sober underside carrying a head
That’s white and airy, that boils steadily,
And the head grows as the belly slides under,
And the whole thing gives up, flopping itself
On the rattling shingle, tossing froth,
While behind, what had seemed a mere bulge
Is the new wave, its skin stretched to breaking.

St Kevin had the gift of talking with beasts.
It came naturally to him, a hermit,
Living amongst them in his hollow tree
In Glendalough, long vale of icy lakes.

But just because he and they could converse
Doesn’t mean that everything went smoothly.
“Let me milk you,” he said, “so that I can
Subsist on a diet of doe’s milk and sage.”

She sprang latterally up the heathered hill.
“Absolutely not; never. That’s invasive,
Embarrassing, probably painful, strange.
Find something else to drink, or go back to your kind.”

“Modesty forbids,” he said, “that I
Should apply the word to myself, yet ‘saintly,’
Surely, is the term that simple truth demands.
Didn’t you see how, when they’d gnawed bare the bones

And longed for more–my human multitude–
I had only to pray; then juicy meat reclothed
Each rib that they had stripped to white? I am
listened to; you’d be wise to do what I say.”

But she was gone, her dappled flanks just shimmers
In the fluttering lushness, the cool dampness,
The extravagant, multitudinous greenness
Of the breezy glen with its two clear lakes.

A red fox spoke up. “Large mammals are warned,”
Said he, “to be in their dens or burrows
By nightfall and to avoid all noises
That might disturb or fright the smaller kind.

“Also: no kindling fires or leaving picked bones
In piles, no uncovered waste, odd chanting,
Spitting in the loughs, marching right though nests,
Shouting, shooting, or walking on the grass.”

St Kevin understood where this was headed.
It wasn’t just his personal repute
He had to worry about. There was also
His ministry to pagans and sinners.

He gathered the wary beasts in a ring.
“I’ll live humbly in my hollow tree, making
No demands, restricting my human flock
To the upper vale and ringing their buildings

“With stone walls, as much to hem them in
As your kind out. Let’s just keep today amongst
Ourselves, shall we? Let the story be that Kevin,
Renouncing the world, spoke the tongues of beasts

In Glendalough, that broad, still vale, where leaves
Of every green tremble when the soft rain falls.”

(See also: the scholar and his dog ; for Gerard Manley Hopkins; and The Cliff-Top Monastery by A.B. Jackson)

The Anachronist is my interactive novel. Several readers have posted reviews of it on the Interactive Fiction Database. (If I may say so, the one person who gave it a low quantitative rating had a complaint about a technical issue that I’ve fixed since then.) A reviewer called CMG makes some helpful and valid critical points, but in the interest of blatant self-promotion, I’ll quote from the good parts of the review, which nicely summarize my intent:

You play as a woman about to be burned at the stake for witchcraft. She is lashed to it when the story starts. It is being lit. But she doesn’t burn just yet. She has been apprenticed to an alchemist, and has gleaned the art of memory. This allows her to retreat into her own mind and escape the fire — temporarily.

A single moment expands to encompass days, weeks, years, lifetimes as she plunges deeper and deeper into her memories. …

Time obviously goes out the window. Anachronism isn’t a mistake: it is the truth. The more time decomposes, the more we understand as we come to learn the circumstances surrounding the present moment. It’s a complex little plot, with conspiracies and double-crosses. Bit players enlarge to take central roles as our protagonist’s focus sharpens. Structurally, this means that the story is based around increasingly dense telescopic descriptions. We have a scene, we concentrate on a detail, that detail becomes another scene, we concentrate on another detail in that scene…

More than any other interactive fiction I’ve played, this feels like a novel. …

I faced the hardest decision I’ve had to make in a choice-based game in this story. At multiple points, you can break your concentration and return to focusing on the stake, the rising fire. I didn’t do that. I stayed in the protagonist’s head (or maybe the protagonists’ heads). And finally I reached a point where I had been reading for hours, for days, while the stake was still burning, and the game confronted me: what was I accomplishing by living in my memories? Shouldn’t I focus on the fire, what’s actually happening?

I didn’t know what to do. After playing for so long, I really felt as though I was avoiding the story’s reality. I had stretched out my time on the stake in real time by reading the text. It was absurd. I should’ve been burnt to a crisp. Here was the story’s most glaring anachronism, and I was the anachronist enabling it.

What I chose to do next doesn’t matter as much as the fact that the game created this situation in the first place. This isn’t a story whose strength rests on making the “right” choices. Its strength comes from how its themes are reflected in the reader’s own experience, which can only happen because it’s interactive.

In this sense, it’s some of the strongest interactive work I’ve seen.

The laughter of the gods is asbestos:
Unquenchable. It’s genuine, hearty,
Unselfconscious. Wet eyes shut to slits; lungs
Heave the mountain air. A shaky finger points
To the god who started it off: Nice one.
He’d mentioned some mortals’ pratfall end:
Sinkhole swallowed family car, gas main blew,
Drunken, laid-off father shot wife, kids, dog, self.
Mirth subsiding to satisfied chuckles,
They take sweet foamy sips from the nectar’d bowl.
Then someone starts it up again. What about
Heart attacks, yes, or slow wasting sicknesses?
The joke is contagious; they’re all chiming in.
Plagues, famines, lonely singles quietly
Ending it. Civil wars! Firing squads!
They keep it going to maintain the mirth,
Each relishing the others’ pleasure:
No pretense, no competition, no critique,
Just a nice way to pass the endless time.

(see also a poem should and voices)

I’m striving to be a little less present.
You need the attention of our group.
Your anxious eyes, urgent words convey a gripe;
They sketch a threat you’re sure is prescient.

But I’m counting syllables in my head,
Selecting words for a private longing,
Rehearsing anxieties—more than learning.
The staccato of your speech makes it hard

For me to keep my restless inward eye
Focused steadily on my lost past, my fears,
Or to freeze this mood in lasting phrases.
You, they, and we interrupt the flimsy I.

It’s a discipline to suggest attention
While indulging fully my own tension.

(Posted on the DC->Boston shuttle)

It has come to my attention that the level of my age
Is now set to fifty, with more movement on the gauge.
Who authorized this increase? Who consented to the change?
The alternative is worse, you say, but we’ve breached my chosen range.
I’ve searched my files for decades past and found most data gone.
Records labeled thirties, forties seem to be withdrawn.
Those phases passed much faster than I’d been led to understand;
I can’t recall what happened then or whether it was planned.
I’m writing to request a reset, please: thirty-five and hold it there.
Oh, and reset all my family, too; just me would be unfair.
Once I see the options back, and the meter’s restored to high,
I’ll retract the review I’ve given you–but I await your prompt reply.